My stay in hospital

I am sorry I lost touch with my friends and readers, but I was in hospital over the past few weeks. I am ok now, but recovering slowly.  I received wonderful care in hospital, but the worst thing was that I was unable to sleep there.  So I think at the end I was sick of sleeplessness.  I was diagnosed with a weak heart on entry to the hospital, which led to a heart attack at the hospital.  I had also some kidney problems, because I fell at home and stayed all night on the floor, which the doctors told me would do damage to the kidneys. It is very boring to you and also to me and I long to finish my book and get it printed.

While I was at the hospital, I was kept being tested for the coronavirus, practically daily and all the tests proved negative.  I was amazed incidentally that how hungry for literature the nurses were, they all seemed to love hearing about my work and about my books. The nurses practically liked “In Praise of Older Women” and they wanted to read about “An innocent millionaire”.

Going off topic, Kate Hopkins is a very enjoyable commentator, but I parted company from her when she speaks of the more than fifty percent of people who are idiots.  Perhaps I misunderstand her, but she seemed to locate the idiots among ordinary people.  But stupidity is boundless and can be found in every strata of society.  To give an example from Hungary one of the greatest poets of the 20th century Attila József a genius who was the son of an illiterate washer woman, the intelligence the brilliance of people who didn’t have much formal education is grossly underestimated. 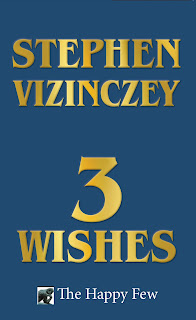 My “3 Wishes” novel, which I believe is my best book is almost ready for the printer and I hope you will be able to read it in about a months-time if the epidemic allows it.  As I often said I am not so much of a writer, but a rewriter and I was writing and revising this novel for 17 years. Reading it over last time, I was amazed how much the world has changed during these 17 years, we are at a better place than we were all those years ago.  So part of the book is already past history.

I dedicate my new novel to my wife Gloria who died on November 19th 2020, it was a big blow when Gloria died, because it must have contributed to my health problems. Anybody who has read any of my books and liked it I would like to comment on Amazon and on Facebook, to keep the books alive.

Incidentally I am asking readers to recommend my books without any financial motives. I had sold more 8 million copies around the world and now the books are building a result by people who have bought them and so those books are their properties, and then they resell those books where any money goes to them.

Posted by Stephen Vizinczey at 1:33 PM No comments: