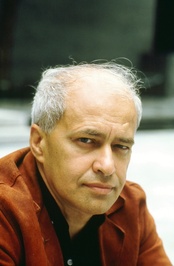 I am working now on how common humanity breaks through even enemy lines during the revolution.  During the Hungarian revolution of 1956 I led a group of fellow students (mainly from the Theatre and Film Academy) and I brought them to my mother for breakfast in the morning. We had two rooms on a villa on Buda (the hilly north side of Budapest) on Rosehill.  The huge apartment upstairs belonged to the Stalin-prize winning artist, the head of the Arts Academy. We had a car and we had our Russian submachine guns. When we arrived there was a small mob outside the villa and they wanted to lynch the painter – a famous member of the regime. Mother came out and was worrying about the family upstairs. I wasn’t driving and fired a round over the head of the mob, telling them to disperse as there wasn’t going to be any lynching there. I certainly didn’t risk my life to lynch anybody. I went upstairs to calm the family. The man was about fifty, but his wife was young and beautiful. They had two daughters, two young teenagers. They were scared out of their wits and I felt quite happy being able to calm them.

That very morning we all had a couple of near-death experiences.  I looked down at the barrel of a big gun from a tank and ducked my head. 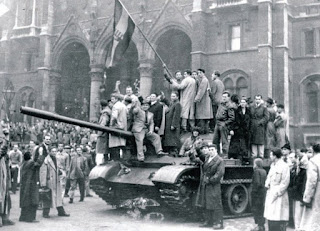 None of the others in the car felt any differently from me. When you watch violent scenes of a revolution on television, the rampage is done by people who actually weren’t involved in the fighting.  Before the tank arrived (we were holding out behind a factory wall) I was opening a round 5 pound tin can of Kraft cheese. - It was a couple of inches from my head when I ducked. When I raised my head, the cheese was cut right down the middle by a shrapnel. Had the shrapnel fallen a few inches to the right, it would have split my head in half.  This kind of experience doesn’t make you bloodthirsty.

To finish the breakfast incident, the security police came to get me when the revolution was beaten – but I was already gone, so they took my poor mother.  The Stalin-prize winning artist went and got her out before they could ship her to an internment camp. 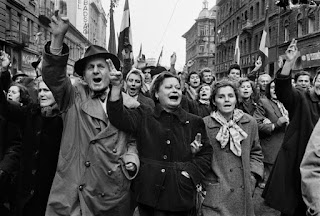 All this came back to me because I’m writing my next blog about Pushkin, the Russian Shakespeare.  His past ancestor was a Nubian Muslim and Pushkin wrote the story of “Negro of Peter the Great”

‘The Captain’s Daughter’ (he and Kleist said more with fewer words than any other writer).

That story is about the Pugachev rebellion.  He was a serf leader and got close to overthrowing Tzarina, Katalin the Great. While organizing his uprising incognito, the hero, a Russian officer, gives him a sheepskin jacket against the freezing winter and as a result Pugachev helps the officer to protect his love and winks at him before he is executed. 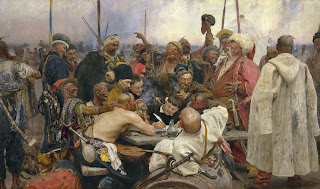 He had a Nubian black great grandfather whom Tzar Peter the Great had educated in Paris and before the Tzar died he had his Nubian married to a Russian aristocratic family. So you can see from all his photos and pictures that Pushkin was a black man; he is the greatest writer in the world.  As mixed marriages are very common these days, this is a very significant detail about Pushkin, which I am sure all your friends would love to hear. 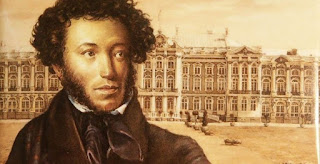 Posted by Stephen Vizinczey at 12:23 PM

The memory of the Hungarian Revolution appears very fresh in Vizinczey's mind. I hope he will continue this memoir.

I look forward to his comments on Pushkin, who I did not realize was a half and half.

It is a surprise for me, that Pushkin was half breed. Still he is one of the greatest Russian poet.

Fascinating to read about your experiences during the Hungarian revolution, Stephen.

Besides «The Captain's Daughter», Pushkin also wrote an historical study called «The History of Pugachev». He was fascinated about that rebellion and its leader.
I hope you keep sharing with us your experiences during the Hungarian Revolution, Stephen. You must become our Pushkin of that popular rising against totalitarism.